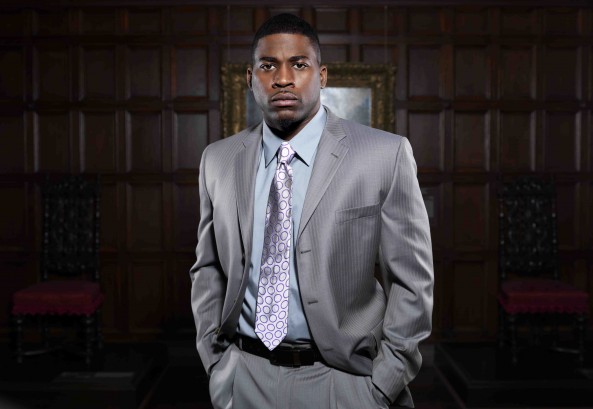 The fascination that artist, producer and actor David Banner holds for superheroes has spilled over into his new mini web series, “Walking with Gods.”

Time travel, African mythology, spirituality, and supernatural abilities are all incorporated into the web series, which  is centered on the character, Aket Heru (played by Banner). The son of a celestial king, Aket is betrayed by his envious brother, Liel, and subsequently cursed by an evil spirit known as Setus. The curse erases Aket’s memory and he becomes oblivious to his God-like abilities. Setus also destroys Aket’s family in the process, but spares his life merely for amusement and torment.

Due to his amnesia, Aket embraces a new name: Alex Light. Throughout the series, he’s plagued with the burden of breaking the curse put on him by Setus and restoring his true identity and supernatural powers.

“Walking with Gods” is funded through Banner’s 2m1 (two million people with one purpose) Movement, a fundraising initiative that gives back to local communities and artists around the country.

David Banner talked about what inspired “Walking with Gods,” his future plans for the web series, recently starring in the multi-million-dollar grossing film “The Butler,” and his 2m1 movement.

What inspired you to start this mini web series?

I’ve always been enthralled with superheroes and the ability to be something else. And through this journey, I realized that we actually are something else. We have the ability, but we don’t study or we don’t eat right or we don’t place our bodies or our minds in the right situation to be able to capitalize off that. So, all of that stuff came together and I decided that I was going to make my own [superhero].

What exactly do you mean when you say we’re all ‘something else’?

Regardless of what religion, for the most part, that you believe in, if you believe you were derived from something greater, if you believe God is all that exists, we are that of Him. If we say in Christian terms, we are the children of God, what does that make you? If God is God and you’re a child of God that would make you a God too.

That’s something that could be viewed in a potentially sensitive light by certain people.It’s true in religion. It’s true in physics. People can be emotional but how can you debate what I said, if you truly are who you say you are? The problem is, people don’t truly believe the things that they say. They don’t even take time to interpret the things that they read, and a lot of people don’t read or even listen to the things that people are telling them. If you’re truly the child of God, what are you? It’s simple.

How long has “Walking with Gods” been in the making?

It’s been about four years actually. This started off with me and 9th Wonder’s album, Death of a Popstar. I created the character. 9th wonder also had a character. We were going to do a graphic novel cartoon. Things didn’t go the way that we thought they were going to go as far as with the major label. [We were] depending on somebody else to believe in the vision and they never did. I ended up continuing it.

Out of all the approaches you could have taken with this series, why did you choose to theme it around a superhero?

One, because that’s what I like. You have to go with things that you’re passionate about. If nothing else, even though I know this is going to be amazingly big, I always wanted to be a superhero. I go to casting calls and all this kind of stuff, and hope that people see. I workout every day hoping that somebody will believe that I’m a superhero, or that I can be that in their movies. And then I realized, ‘no,’ I have to believe first. Like, Ice Cube did it [with “Friday”]. Ice Cube knew that he could be a leading man but wasn’t nobody going to pick him, so he started making his own movies. And once people saw that it was successful, then people started paying him to be a leading man. You know nobody was going to do that unless he took that step first.

I’ve always been passionate about space and time and traveling. It hurts me that every time you see a black man on TV for the most part, you see him doing the same things over and over. They keep us on earth. They keep us in the hood. Why stay in people’s boxes? Why continue being somebody’s jester, when you can be the king of the universe? Why kill a whole bunch of folks when you can heal?

In your words, what would be the best way to describe “Walking with Gods” for those who may not be familiar with it, or even have trouble fully understanding the series? It’s about a man forced to have to find himself. To believe in himself. To find the God that’s within him and the God that’s outside of him. And I believe that’s a true struggle of all people—both good and bad or right in the middle. That constant struggle of trying to find balance. That constant struggle of having to believe in self.

Has it been challenging in any way playing a superhero? It’s totally opposite from the roles you’ve played in movies like “Black Snake Moan” and “The Butler.”

Naw, I created it. Hell naw. The only thing that has been challenging is, you’ve got to have a great team around you and I’m just now building me a great team. I don’t think it was one of my best performances, because I was the boss, the actor, [and] the co-writer. We’re setting up scenes. I was doing too much. That’s the only difficult thing. Just finding a great team around me, even though I’m producing it and even though it’s mine, I can separate myself from all of that and not have to worry and just really get into being the character. At the end of the day, it’s about [making] a wonderful product. That’s what I’m trying to get folks back to, and people wanting to pay for great product. I want to be the greatest in the things that I choose to do. I want to bring the quality back to help people think, because if you are what you think, you think what you hear and see, then what are we?

Will “Walking with Gods” continue to be an online series, or do you have plans of expanding it?

It’s not specifically for anything. It’s whatever God allows it to be. I have plans of it being a full-fledge movie. A full-fledge television show. I plan on going all the way with it. And the thing that I want people to understand is this is so much bigger than just one person or one character. That’s why I called it “Walking with Gods” with an “s”.

The main character’s kryptonite, as some would say, would be him not believing in himself—him having the full potential. If you take away from it from a religious aspect, think about how many people limit themselves. God has blessed us with everything we need internally, we just have to go and find. We search so much for answers outside of ourselves [but] God has equipped us with everything that we need.

You recently starred in “The Butler,” which has been a blockbuster in theaters, grossing more than $100 million. How was that experience for you? That’s one of the biggest five minutes of my life. It has really been changing the scope of my life. The people that have been calling. The things that people have been saying. And it’s fun, because I’m starting to get noticed for that more than anything right now. I mean people of all races and all colors all over the world are like, ‘hey, that’s the dude from The Butler.’ And that’s really cool. I don’t have a problem with that. I think the thing is just for me to be prepared for it. All the things that I’ve ever prayed for, all the things that I’ve ever wanted are now presenting themselves right in front of me. And it’s crazy when you don’t have any more excuses. I don’t have any excuses. I don’t have the excuse that somebody’s holding me back. I don’t have the excuse that I’m signed and I can’t do what I want to do. Everything is in front of me. I can create whatever I want to. That is a God-like ability. Imagine for me to be able to think something, speak it into fruition, and it appears. I have the tools. I tell people that God has blessed me. All the pieces are on the table, but it’s a puzzle and I have to put it together.

Could you briefly touch on the 2m1 movement?

The purpose of the whole movement is really to just show people that we need to control our own images—both good and bad. If we want better TV, we have to make better TV shows. If we want better music, we have to provide for ourselves and create opportunities and situations for ourselves. 2m1 is about us controlling ourselves and our money, images, and music. If people want to do it, they can hit me up at davidbanner.com and be a part of the movement.

How often are you planning to release episodes for “Walking with Gods”? I don’t know yet, brother. I’m moving in the spirit, but I just need for people to know how expensive it is. It’s very expensive. Those special effects don’t come for free. That’s why I put the credits at the end of every one of the episodes. I want people to see that these are real people that I pay.

Tell everybody in this interview that the most important thing they could do for me is to tell somebody else to watch [“Walking with Gods”], and then ask the person that they asked to watch it, to tell somebody else to watch it. That’s the reason that “Walking with Gods” has been so great. We got 20,000 views in less than a week by word of mouth, for the most part. One of my friends, who’s a publicist, she shot it out to everybody one time, but really, it’s been no PR and I’ve been very proud of that. And I think what happens, if we do it that way, is people feel the kinsmanship with it. People feel like it’s something they’re apart of and that’s what I want to create.

David Banner adopted his rap moniker from the lead character of the television series, “The Incredible Hulk.” A staple in the southern rap realm, Banner has released six solo albums, as well as a collaborative effort with reputable producer 9th Wonder titled Death of a Pop Star.  He’s responsible for such hits as “Like a Pimp” featuring Lil’ Flip, “Play,” and “Get like Me” featuring Chris Brown and Yung Joc.

Outside of rap, he scored the lead dance sequence of the 2011 remake of “Footloose.” He wrote, produced and arranged the song for Gatorade’s 2010 “Gatorade Has Evolved” TV ad campaign, as well as the 2011 Mercedes tribute single, “Benz” which also featured U.K. singers Estelle and Daley.