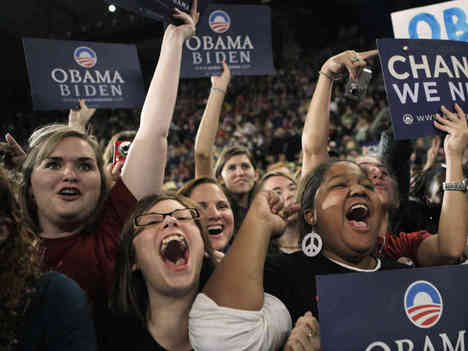 The last time 24-year-old Havier Green voted was in 2008. President Barack Obama was an Illinois senator running for president, and Green was an 18-year-old college freshman who viewed voting as a “powerful and historical act.” But Green said he didn’t notice any significant change locally or statewide after Obama’s election, so his perspective on voting changed. He’s refrained from casting another ballot ever since.

“After a few years removed from [Obama’s] inauguration, the illusion that voting brought about great change dissolved,” Green said. “Especially in a red state and a city rampant with corruption and stratification, I just feel like there’s more room for change outside of politics than within, so I focus my energy on those.”

Green is part of the generation of “millennials,” born between the 1980s and the early 2000s. Research has shown that millennials are the least likely to vote in elections.
According to 2012 U.S. Census Bureau data, voter participation of people between the ages of 18 and 29 has consistently decreased since 2008. Also, a survey conducted by the Harvard University Institute of Politics revealed that fewer than one-in-four Americans between those ages plan to vote in November’s presidential election.

Locally, a group of millennials has banded together to galvanize their peers to register to vote and participate in upcoming elections. Led by Allworld Project Management and The Redwing Group, the WhyVote Initiative seeks to increase millennial voter participation and awareness to impact the future of Memphis and Shelby County.

“Millennials aren’t voting because they’re unaware of the issues and the impact [it can have on them],” said Brent Hooks of Allworld Project Management. “You can talk to a bunch of young people right now and ask them what they want to do and they say, ‘Well, I want to own a business.’ And then you ask them, ‘Do you vote?’ and they say no. They don’t understand the correlation between them voting for an elected official who may raise property taxes or raise sales tax, which may affect their business.”

Millennials supporting the WhyVote movement gathered in front of the Civic Center Plaza downtown earlier this week and marched to the Shelby County Election Commission to encourage peers to register and submit ballots. According to WhyVote data, millennials make up nearly a quarter of Shelby County’s population at more than 196,000 people, but only around 460 had cast votes during the early voting period of the current county election as of last week.

Patrick Hendricks, 30, is one of the millennials who believes in the importance of voting.

“I vote because I want my voice to be heard,” Hendricks said. “Because of the history with African Americans in this country being denied the right to vote, I’m especially motivated to vote. More than that, I have no right to complain unless I exercise my right to vote. Folks in our generation are surprisingly apathetic. Some young people have this false assumption that their day-to-day lives are not affected by the people in office.”

By Louis Goggans
This article is also featured in The Memphis Flyer.