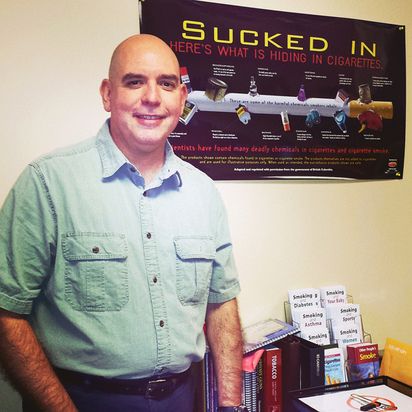 Elizabeth Hart will never forget August 22, 2006. That’s the day her father suffered a fatal heart attack while he was shaving in the bathroom.

“It was because of the smoking he was doing,” recalled Hart, spokeswoman for the Memphis and Shelby County Health Department. “We kept pushing for him to quit smoking. Even somebody like myself who works in public health, I couldn’t convince him. It was very hard on us, because you have that feeling of, ‘What could I have done more?’ To this day, I still think about what I could have done.”

Despite his family’s pleas for him to rid his habit, Hart’s father smoked at least a pack of cigarettes a day. In the end, his addiction claimed his life, and it also left a permanent pain within the hearts of those close to him.

Hart’s father’s deadly battle with cigarettes is one of many stories shared on the Shelby County Tobacco Cessation and Prevention blog. Each Friday, a different person — often county employees — reflect on their past battles with smoking cigarettes or the pain they experienced from seeing loved ones succumb to tobacco-related illnesses.

The Memphis and Shelby County Health Department maintains the blog, which launched on World No Tobacco Day, this past May 31st. In addition to personal stories of former smokers, the site also provides motivational images, facts about the adverse effects of smoking, and weekly surveys for people who want to or are trying to quit smoking.

Tobacco use is the number-one preventable cause of death in the U.S. According to the Centers for Disease Control and Prevention (CDC), cigarette smoking kills more than 480,000 adults in the nation and nearly 6 million people across the world annually.

David Sweat started smoking at 17 years old. Although he was never a pack-a-day smoker, he maintained his habit for 10 years. On the blog, Sweat shared his battle with cigarette smoking and how he was able to overcome it.

“My mom wanted me to quit. My dad wanted me to quit,” said Sweat, chief epidemiologist for the health department. “Over time, I became a lot more aware of the health consequences of smoking. I learned more about secondhand smoke. Even if people don’t smoke, if you’re exposing them to secondhand smoke, you may be giving them cancer or increasing their chances of a heart attack or heart disease or a stroke. It was important not only for my own health to quit, but it was also important for the health of people around me who I cared about.”

People who battle with addiction to cigarettes or other forms of tobacco, such as cigars, pipes, or chewing tobacco, are encouraged to consult with a doctor about nicotine replacement therapy and other options to help them rid their dependence.

“There are some people who can quit cold turkey and everything is fine,” Hart said. “And then you have some who try and they’re unsuccessful. They try another way, and they keep trying until ultimately they quit smoking. What we want to do is not only get those individuals who are already smoking to quit, but we also want to get to the younger generation to inform them and educate them to not ever pick up a cigarette.”