(247wallst.com) – The number of violent crimes across the United States is estimated to have dropped by 4.4% in 2013 from the year before, according to data recently released by the FBI in its 2013 Uniform Crime Report. In all, the number of such crimes declined by nearly 15% in the last 10 years.

Putting this drop into context, John Roman, senior fellow at the Urban Institute, told 24/7 Wall St.: “A 4.4% reduction in violent crime is astonishing. If you saw a similar increase in GDP, or a similar decrease in unemployment, it would be huge national news.”

Despite the nation’s improving crime rates, a number of large U.S. cities are still especially dangerous. Nationwide, 368 violent crimes were reported for every 100,000 people in 2013. Such crimes include murder, rape, aggravated assault, and robbery. In America’s 10 most dangerous cities, there were more than 1,300 violent crimes per 100,000 residents.

In addition to high violent crime rates, these cities are characterized by remarkably high levels of property crime. There were 2,731 documented cases of property crime for every 100,000 Americans last year. Meanwhile, in six of America’s most dangerous large cities, there were well over 5,000 property crimes reported per 100,000 residents. Such crimes include motor vehicle theft and burglary.

The problem in dangerous cities, according to Roman, is about “economic policy, it’s not about crime policy.” Roman noted a number of economic policies that, he said, have contributed to lower crime rates. The cities that “have been successful have promoted immigration, they’ve reduced economic segregation, and they’ve encouraged gentrification,” Roman said. “I think all three of those things are controversial. But I think the data suggests the results are overwhelming.”

In addition to low incomes, these cities’ residents suffered from high poverty rates. More than one in five residents in all but two of the most dangerous cities lived in poverty last year, well above the national average. The poverty rates in Cleveland and Detroit were particularly high, at 36.9% and 40.7%, respectively, both nearly the highest among all cities reviewed.

Education is another factor related to crime rates. Less than 85% of adults had completed at least a high school diploma in all but one of these cities, versus the national rate of 86.6%. In Cleveland, just 78.2% of adults had completed at least high school. However, reducing poverty and improving education to help fight crime can be challenging in many cities. There are “structural disadvantages in that crime is such a cultural norm that it’s hard to fix,” Roman said.

The FBI has attempted to discourage direct comparisons of crime rates between cities because local factors cause reporting to vary considerably between cities. Despite this characterization, Roman suggested that some comparison can be useful. “To me it’s analogous to saying we shouldn’t rank how well schools are doing. How are you ever supposed to help the lowest-performing schools if you don’t tell them they’re the lowest-performing school?”

To identify the most dangerous cities in America, 24/7 Wall St. reviewed violent crime rates among the nation’s cities with populations of 100,000 or more from the FBI’s 2013 Uniform Crime Report. Property crime rates also came from the FBI’s report. The data were broken into eight types of crime. Violent crime was comprised of murder and non-negligent manslaughter, rape, robbery, and aggravated assault; and, property crime was was made up of burglary, arson, larceny, and motor vehicle theft. In addition to crime data, we also reviewed median household income, poverty rates, and educational attainment rates from the 2013 Census Bureau’s American Community Survey.

Below are the five most dangerous cities in America. To see more cities that made the list, visit 247WallSt.com. 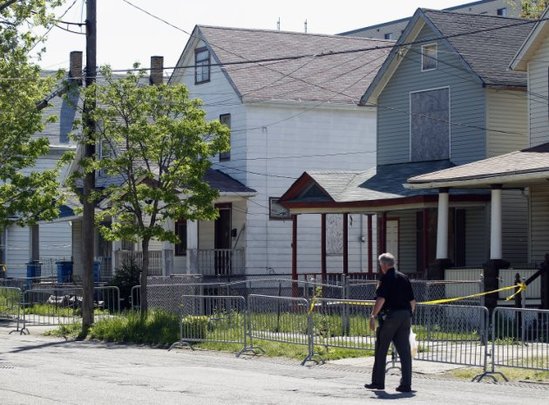 5. Cleveland, Ohio
> Violent crimes per 100,000: 1,478
> Population: 389,181
> 2
013 murders: 55
> Poverty rate: 36.9%
> Pct. of adults with high school degree: 78.2% Low educational attainment and poverty rates among Cleveland residents may explain, in part, the area’s high violent crime rate. Just 78.2% of area adults had completed high school and 16.5% had at least a bachelor’s degree as of last year, both among the lower figures nationwide. Also, Cleveland’s median household income of $26,096 was lower than that of every other large U.S. city except for Detroit. Robberies accounted for the bulk of Cleveland’s violent crime rate, with 897 reported per 100,000 last year, second only to Oakland. The burglary rate was even higher. More than 2,100 burglaries — thefts occurring without the victim present — were documented per 100,000 area residents last year, the second highest rate in the country and more than three times the national rate of 610.

3. Memphis, Tenn.
> Violent crimes per 100,000: 1,656
> Population: 657,691
> 2013 murders: 124
> Poverty rate: 27.7%
> Pct. of adults with high school degree: 82.5% There were 7,200 aggravated assaults reported in Memphis last year. This was one of the largest figures among U.S. cities and a major contributor to Memphis’ high violent crime rate of 1,656 per 100,000 residents. In addition to a high violent crime rate, Memphis also suffers from high levels of property crimes, which totalled nearly 40,000. There were 366 arsons in 2013, for example, more than in all but five other large U.S. cities. Like residents in a majority of the country’s most dangerous cities, Memphis residents are far more likely to live in poverty than most Americans. The area’s poverty rate of nearly 28% in 2013 was among the highest rates nationwide.

1. Detroit, Mich.
> Violent crimes per 100,000: 2,072
> Population: 699,889
> 2013 murders: 316
> Poverty rate: 40.7%
> Pct. of adults with high school degree: 78.6% Detroit’s violent crime rate of 2,072 per 100,000 residents was the highest in the nation last year. This is despite the fact that the violent crime rate fell from 2,123 incidents per 100,000 people in 2012. Further, there were a total of more than 300 murders in Detroit last year, also among the worst figures nationwide. Like many other dangerous cities, Detroit residents are quite poor. A typical household earned less than $25,000 in 2013, and nearly 41% of people lived in poverty, both the worst figures among large U.S. cities. The region’s history of high crime rates may have encouraged residents over the years to take their protection into their own hands. Like in several other Michigan counties, residents of Wayne County, where Detroit is located, are more likely to have concealed gun permits than residents in the vast majority of populous areas. The number of applications for permits has risen dramatically in recent years.