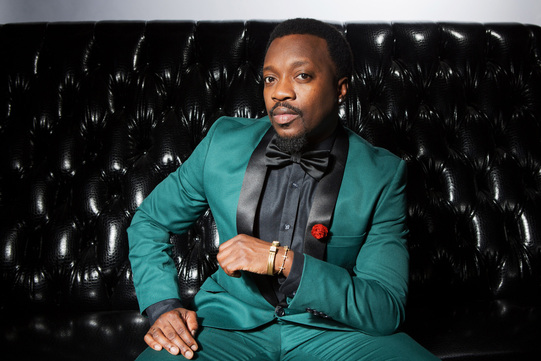 The sound of Anthony Hamilton’s soulfully raw voice echoed throughout Memphis’ Cannon Center on December 7th as he performed tracks from his latest album, Home for the Holidays. But it didn’t stop there. The audience also got a chance to enjoy some of Hamilton’s classics like “Comin’ from Where I’m From” and “Charlene.”

The multi-Platinum, Grammy Award-winning artist is currently embarked on a 17-city “Home for the Holidays” tour, and Memphis was one of the scheduled stops.

Following his engaging performance, I got a chance to talk with Hamilton backstage. He opened up about the initial struggle of recording Home for the Holidays, what it’s like to be a father of six during Christmas, his recent Grammy nomination, and Memphis’ influence on his music.

This is your first Christmas-themed album. What inspired you to create this project?

Just real life. Living, and seeing what people go through. And the holidays brings about the feeling of wanting to love and to share and do all that stuff, yet in still, you’re still going through whatever’s happening in your relationship. And for the moment, it takes away all the pain and the hurt, or it reflects it. So what I did on this album was just speak about the real.

Listening to songs from the album, it sounds like you created the album primarily for the people who aren’t able to enjoy an extravagant Christmas.

Over half of the people have those struggles and have those unfortunate Christmases. I want to let them know that it’s not even all about that — spending your money. It’s about that quality time with the loved ones and doing something that means more to you than putting yourself in debt.

Is this going to be the first of many holiday-themed projects from you?

Yeah, well, I might even make an Easter album. Peter Cottontail; I like watching him. I might as well sing about him. (Laughs). You know what, this album will probably sell for years and years. And what I’ll do is try to take this album and recreate it, maybe add another feature on it, invite different guests to sing on it. You know what I mean? Just kind of restructure it. I don’t know yet, but it’s got me thinking about other things.

What was your frame of mind going into creating the project?

It was hot as hell, and it was summer, and I wanted to go outside and play. (Laughs). It took a while to get into that mode; it was the summertime. It was hard to stay in the physical spirit with everybody in biker tights and short shorts running around, going to the beach, and I’ve got to stay and finish this Christmas album. I wanted to get it done [and] out of the way. But once I started getting it finished and working diligently on it, it started to really become a beautiful peace of work. And all of the little interludes and things that we did on the whim became very special parts of the album.

Yes, I’m a father six times. I have six boys.

Considering that, what does Christmas mean to you? How important is it to be with your family during the holidays?

Christmas means I’ve got to spend a lot of damn money. (Laughs). Naw, Christmas is just a time to reflect and spend time with my kids and let them know, ‘Even though your daddy’s an entertainer, that stuff doesn’t really matter when it comes to being with you guys.’ That’s first and foremost. ‘But this is something that affords you some things that I didn’t have.’ I just want to let them know, ‘I can put this down and set aside time for y’all,’ because they’re that important.

On stage, you mentioned that you used to go to Isaac Hayes’ nightclub and restaurant. And you’ve collaborated with Al Green, which earned you both a Grammy. Can you talk about Memphis’ influence on you?

You’ve got all the greats that come from here; all of the good music that Memphis brings to the table. Even Nashville. You’ve got country. [With Memphis], you’ve got Stax, and just knowing that all of that stuff came out of here, you pay attention to it. Sonically, Memphis had a whole movement back in the day. I listen to it. It has influenced me, and I put it in my music.

Who are you listening to right now?

Who am I listening to right now? I listen to a little Ed Sheeran every now and again. T.I.’s album is banging. I’m a big hip-hop head. And Sam Smith, I like what he’s doing. Jennifer Hudson; she had a nice album. I like Young Thug.

I want to congratulate you on the Grammy nomination for “As,” your duet with Marsha Ambrosius. How did that come about?

I got the call to be in [The Best Man Holiday], and they were telling me about the song. I couldn’t really hear it in the way they described it to me. Once I did, I felt like it would be a great duet, but I didn’t know it would be Grammy nominated. But the movie was so powerful; just to be in it was incredible.

On another note, I like how you emphasized the importance of thanking the Lord during your performance. What motivated you to do that?

That’s what guides me. That’s what keeps me from going too far over the edge, and that’s just who I am. I’ve been loving the Lord all my life. I know what it feels like when I’m not spending time with Him. I know what it feels like when somebody doesn’t have Him. I know what those spirits are, so I try to keep a good balance, and try to put it out there for everybody else to feel comfortable with Him. Sometimes the church hurts people and makes people afraid to go back to it, so I just praise the Lord right here. I might be the closest thing to church they get, so I put it out there.

Is there any advice you would like to provide for up-and-coming artists out there?

If you love it, do it. If you don’t, get out the way for those who do. And just find something you’re passionate about and let it become your brand. Let it become something that drives you to want to do better.

‪From start to finish, a true classic... #OnlyBuilt4CubanLinx #TBT #PurpleTape #AHumbleSoul #AHumbleSoulVibes ‬
#DoughboyWee explains why he considers prisons in Michigan to be “plantations,” not seeing the parole board since he’s been eligible for parole, #Parchman and more. Peep it on ahumblesoul.com ... part 3/3 #ExcuseMeLegend #AHumbleSoul