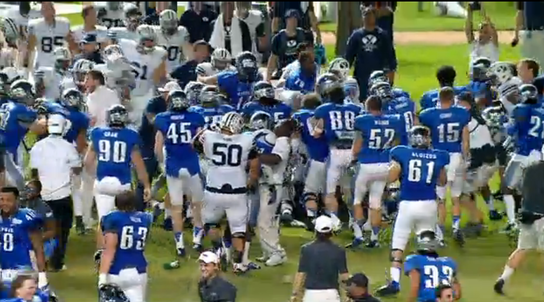 The Memphis Tigers triumphed over the BYU Cougars Monday in the inaugural Miami Beach Bowl.

The action-packed event brought forth two overtimes. An interception from Tiger cornerback DaShaughn Terry served as the game’s closer, and Memphis came out victorious 55-48.

Unfortunately, the Tigers’ awe-inspiring feat was marred by a midfield postgame brawl that left a few players bloody and bruised.

In light of the altercation, University of Memphis president M. David Rudd has issued a statement:

“I have been in contact with athletic director Tom Bowen and his senior leadership team in regards to the altercation that occurred after the Miami Beach Bowl Game. I have asked Tom to work with Coach [Justin] Fuente to fully investigate the incident and to keep me apprised on the actions and discipline of our student-athletes in the coming days. We will provide another statement after the completion of that inquiry. We have the highest expectations of sportsmanship for all of our student-athletes at the University of Memphis. I am very confident in Tom Bowen and Coach Fuente’s leadership and know that working together we will be able to ensure incidents like this do not happen in the future.”

The Tigers ended its season with an impressive record of 10-3.

Footage of the brawl as well as highlights from the bowl game can be viewed below.