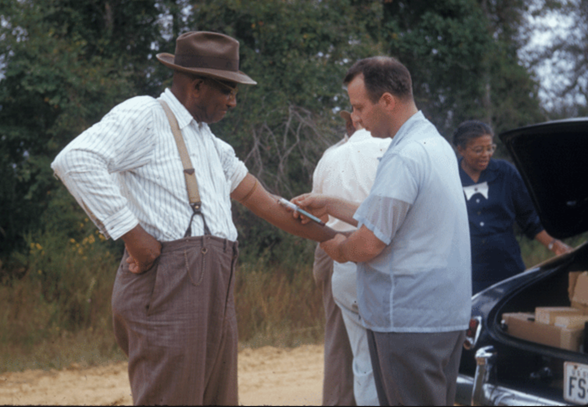 Courtesy of The Atlantic
​
The Tuskegee Study is perhaps the most enduring wound in American health science. Known officially as the Tuskegee Study of Untreated Syphilis in the Negro Male, the 40-year experiment run by Public Health Service officials followed 600 rural black men in Alabama with syphilis over the course of their lives, refusing to tell patients their diagnosis, refusing to treat them for the debilitating disease, and actively denying some of them treatment. Whistleblowers brought an end to the incredibly unethical study in 1972, finally prompting the development of what would become modern medical ethics. But the lives of those black men and many of their families were mostly ruined; many men died from complications of syphilis, and several of their wives and children contracted the disease.
​
Research has long suggested that the ill effects of the Tuskegee Study extend beyond those men and their families to the greater whole of black culture. Black patients consistently express less trust in their physicians and the medical system than white patients, are more likely to believe medical conspiracies, and are much less likely to have common, positive experiences in health-care settings. These have all been connected to misgivings among black patients about Tuskegee and America’s long history of real medical exploitation of black people.
​
A new paper details the real health effects that the Tuskegee Study had on black people. The work from Marcella Alsan at the Stanford Medical School and Marianne Wanamaker at the University of Tennessee provides evidence for a strong claim: that by 1980, the public revelation of the Tuskegee Study in 1972 had reduced life expectancy among black men over 45 by over a year.

The study provides causal evidence in a body of research that stretches back decades, and it is a major revelation. As New York Magazine notes, the main conclusion of Alsan and Wanamaker’s work is that the Tuskegee Study was responsible for over a third of the life expectancy gap between older black men and white men in 1980. But the conclusions extend beyond that and fit with a body of anecdodal evidence from physicians and patients. Disclosure of the Tuskegee Study disrupted a slow convergence of black health outcomes with white health outcomes in the mid-20th century, accelerated an erosion of trust in doctors, and dampened health-seeking behavior and health-care utilization for black men. And it did so more for those who were more similar to the Tuskegee Study’s unwitting participants and those who were closely connected to the community of Tuskegee.
​
For Alsan and Wanamaker, the study spoke to longstanding interests, but required some methodological innovations. “From the medical side I had been sort of acutely aware of the Tuskegee experiment,” Alsan told me. “It would come up among the medical staff and even occasionally with patients. So I think that was one of the seeds that made me think that this could potentially be important.” He connected with Wanamaker, who had been studying racial disparities in education and labor markets, and both became convinced that this nefarious study might have actual quantifiable effects that could be uncovered.

One of the important contributions of their paper is the methodology it uses. It draws mostly on publicly accessible data on medical trust from the General Social Survey, data on health utilization from the National Health Interview Survey, Census measures of migration patterns, and data from the Centers for Disease Control and Prevention on mortality and morbidity. The innovation lies in how Alsan and Wanamaker used those data. Using a triple-difference model, the year 1972 was treated as the “exposure” itself since there aren’t real measures of how the news of the study was disseminated. As Wanamaker said, “we knew that there should be a sharp difference in 1972 and we knew there should be a difference between black men and any other peer group.”

There were two problems though. Black men and white men are already starkly different in health utilization and outcomes, and Alsan and Wanamaker needed some piece of data that could identify the Tuskegee Study itself as a factor in the divergence of those health outcomes. To accomplish this, they  used distance from the epicenter of the Tuskegee Study, demographic similarity to the Tuskegee Study’s participants, and migration clusters, to identify if something that happened in Tuskegee in 1972 could be implicated. What they found is almost too perfect: outcomes, trust, and life expectancy diminished with proximity to Macon County; men who were more similar to Tuskegee’s uneducated, poor, medically underserved population were more likely to suffer diminished outcomes; and migrants from Alabama in the wake of Tuskegee were very likely to carry with them these diminished outcomes.
​
These additional differences point to the singular significance of the Tuskegee Study. Information was less ubiquitous in 1972 than it is today, and distance from Alabama could signal that formal and informal information networks and people emigrating out of Tuskegee played a role in spreading mistrust. People who saw themselves reflected in the Tuskegee Study’s population paradoxically ended up suffering more. And the results hold up even in the health morass of the South, which is notorious for being pretty bad for black patients. “We don’t highlight this within the paper,” Alsan said, “but you actually can see distance effects within the South, even the Deep South.”

The story that Alsan and Wanamaker uncovered is even deeper than the direct effects of the Tuskegee Study. It illustrates how black migrants fleeing the southern exploitation and racism that the Tuskegee Study exemplified carried their experiences with them. Distance mitigated those effects, except in cities like Los Angeles and San Francisco, where clusters of Alabaman migrants lived and worked after the second Great Migration. By the picture painted here, the Tuskegee Study was not a singular event that was reported and processed immediately, but a generational scarring that defined a decade of black history.

It is a shame, then, that it is difficult to envision work that expands the working paper’s quantitative conclusions much further. It’s just difficult to find relevant historical data, and Alsan and Wanamaker’s work already stretches the imagination and limits of analytic technique to make the most of existing data. But their research helps validate the anecdotal experiences of physicians, historians, and public health workers in black communities, and gives new power to them. As Alsan states, “I’ve had individuals come up to me—at least one woman came up to me and she said that after Tuskegee, she was eight at the time and didn’t realize it—and said that they stopped going to her regular pediatrician and drove an hour to get to a black doctor instead of a white doctor.”
​
These findings are also useful in framing health-care debates and discussions of health disparities today. While the researchers did not find similar effects for younger people and the Tuskegee Study, this is a model for understanding a level of medical mistrust that still exists in black communities today. Other violations of ethics or stigmatization of diseases may be causing similar mortality effects now. Also, this research is important for grounding policy on d
iversifying the health-care workforce and for ensuring forward-thinking consideration of medical ethics for marginalized people as the field enters the digital and genomic ages.

Still, a paper that has not yet been peer-reviewed or replicated has its limits, and works best as a spark for more research and a reminder of the country’s past. The two go hand in hand, and there is still much work to be done in understanding broadly how the past America’s racial history defines the present, and more narrowly how people actually engage with their own health. As Wanamaker told me: “I’m surprised everywhere I go about how many people––particularly white people—don’t know this story. One thing I hope is that by publishing the paper we will remind people or even inform them about something that is so important but has dropped out of cultural conversation.”
​
Interestingly, that awareness of the Tuskegee Study is exactly what eroded trust and what Wanamaker and Aslan have identified as a contributor to health disparities in the first place. Black patients were forced to make the impossible choice between participating in a grossly unethical medical system and accessing necessary health services. But the 1972 disclosure made the system less abusive, and led to reforms such as the Belmont Report that established medical ethics and protections for disadvantaged people. The choice for black patients now is no longer impossible, and a clear-eyed discussion of the past can help make it easier.
​