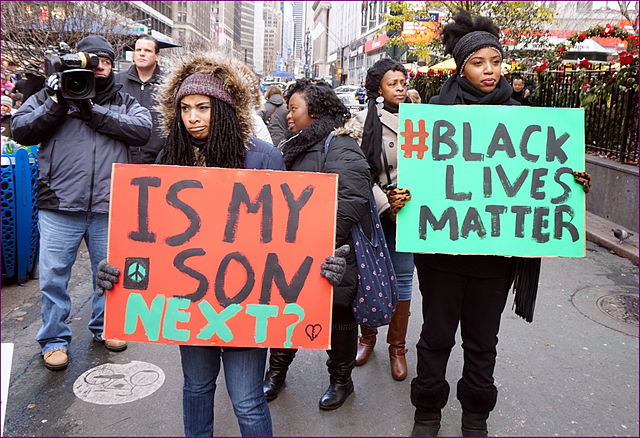 What is Black Lives Matter?
​

Black Lives Matter is a social justice and activism movement founded by Alicia Garza, Patrisse Cullors, and Opal Tometi. It derives from the hashtag #BlackLivesMatter, created in 2013 in response to George Zimmerman’s acquittal in the death of Trayvon Martin.

It uses non-violent means — hashtag activism, protests, marches, die-ins, and intentional social disruptions — to both mobilize people interested in spreading their message and, most notably, to force people who are either apathetic about or antagonistic to it to pay attention.

And while the media has appointed several prominent people — the founding women, Deray McKesson, Johnetta Elzie, and Shaun King, to name a few — as “leaders,” there’s no concretized hierarchy or organizational structure.
​
Also, while the Black Lives Matter movement is relatively new, it has actually existed for decades. Centuries, even.

How so?
​
Even before Black Lives Matter became a thing, the latent message behind it — that Black people’s lives are not valued by America — has been around as long as there’s been Black people in America. Naturally, the message has undergone some nuanced and situationally-dependent changes. 60 years ago, segregation was the antagonist. Today it’s police brutality. And its become a bit more sophisticated and progressive — making sure to include all Black people, not just (straight) Black males. But it has existed for quite some time. It just has a name attached to it now. Martin Luther King, Frederick Douglass, Harriet Tubman — all theoretical members of BLM.

​“Hey everyone. It hurts when police officers shoot us. Because we’re human. And sometimes we die. Which really sucks. So stop doing that, please.”

Nothing about killing police officers?

Or even just being anti-police?

How about being anti-White?

Nada. In fact, many White people are down with BlackLivesMatter, including Patricia Leary, a professor at Whittier Law School, and quite possibly the wokest White person who ever lived. Actually, forget the “White” qualifier. I’m pretty damn woke — not five cups of espresso woke, but definitely at least a quart of RC Cola for breakfast woke — but I’m a fucking Ambien compared to Professor Leary.

So if it’s not anti-police or anti-White, why is BlackLivesMatter considered so revolutionary, terroristic even, to so many people?

I’m tempted to just say “because people are fucking stupid” and leave it at that. But since this is an explainer, I’ll explain.

Among the people who do consider BLM to be a negative thing, there seems to be two separate and frequently overlapping segments.

B) Those who believe that anything with the word “Black” in it is exclusionary and anti-White
​
If you’re a Black person in America, the people comprising segment B) shouldn’t be new to you, because these are the exact same people who say things like “Why is there a Black Entertainment Television and not a White Entertainment Television?” and “Why are Black people allowed to have EBONY Magazine? Because if I started IVORY Magazine, I’d be called a racist.”

And, when encountering these types of people, you’re left with two choices:

1. Educate them. (“Actually, BET exists because networks such as MTV rarely featured work from Black artists. And HBCUs exist because for a very, very, very, very long time, Black people weren’t allowed to attend White schools. And “White schools” were “literally every other school.“)

2. Ignore them, remind them that you want cheese on your Whopper and no ice in your raspberry iced tea, and leave Burger King.

I get it. I guess this is where the All Lives Matter reaction comes from, huh?

Yes. Ultimately you have people either so emotionally and intellectually fragile that they believe BLM is a collective thumbing of the nose to White people or people just too dense and/or myopic to grasp the historically-wrought social and cultural context behind asserting that Black Lives Matter.
​
But even more dangerous than the All Lives Matter dunderheads are the people who consider BLM to be an inherent threat to the safety of police officers. Which ultimately does nothing but exacerbate an already existing “us vs them” dynamic that seems to persist in police culture; especially in regards to policing urban and Black communities.

So by referring to police culture are you insinuating that police officers are mostly bad/racist?

Of course not. This is not a blanket indictment on all police officers. I would imagine that the quality of cop is distributed just like any other occupation. Some are great at their jobs, some are terrible, and most are just average joes trying to get through the day, collect some overtime, and get home and watch Fear The Walking Dead like the rest of us. But the problem is that policing is an occupation where the people who happen to be terrible at their jobs can seriously fuck shit up. A terrible secretary will forget dates and mislabel appointments. A terrible cop will straight up murder people. And then, adding insult to injury, these terrible cops are often protected. Which makes the act of distinguishing between “good cop” and “bad cop” extremely difficult.

To wit, Saturday night, members of the Minnesota Lynx — a WNBA team — wore shirts to recognize the police-involved violence that occurred last week. On the back of the shirts were the names of Alton Sterling and Philando Castile, the emblem for the Dallas Police Department, and Black Lives Matter. Before the game, the players spoke out and said they wished to end all violence and expressed their support for the protestors, the men killed last week, and the fallen police officers. But four off-duty cops working security for the game were so offended by this aggressively inoffensive act that they walked off.

You’d hope that they were admonished by their superiors or appointed leaders, but the President of the Police Officers Federation of Minneapolis, Lieutenant Bob Kroll, supported the officers and even added a dig at the WNBA.

When he was asked if more than four officers had walked off the job, Kroll told the Tribune, “They only have four officers working the event because the Lynx have such a pathetic draw.”

So while bad cops might comprise a minority of the police officer population, it’s an extremely dangerous and protected minority.

Understood. Are there any Black people who consider BLM to be a negative thing?

Of course. You have Black people who also believe its racist and anti-police. In honor of Stacey Dash, the patron saint of these people, I’ll refer to them as Dash’s Dummies. But then you have those who disagree with some of BLM’s disruption-related tactics, and some who believe that disruption is BLM’s only goal. These are (somewhat) understandable but ultimately misguided critiques. The disruption might look and sound ugly and might seem fruitless, but you can’t deny that it’s helped police brutality become a national conversation. Also, social activism has to be disruptive. Without it, things won’t change, because there will be no clear and immediate incentive to at least acknowledge that things need changing.

Yeah. There exists some Black people who refuse to be a part of a movement that was founded by Black women and prominently features and fights for members of the LGBTQ community.