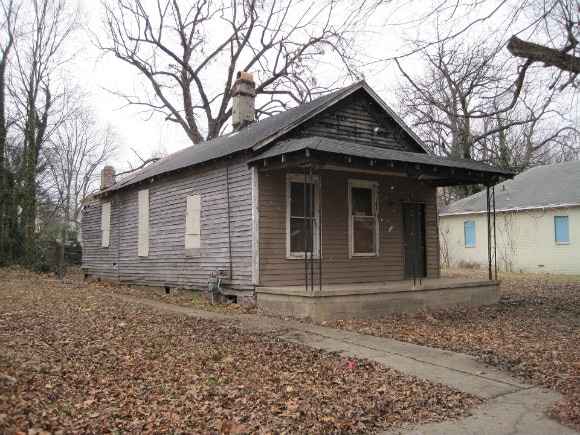 More than four years after being declared a public nuisance, the South Memphis home where iconic songstress Aretha Franklin was born continues to display the effects of dilapidation and despair.

Minimal maintenance has been done to the property at 406 Lucy Ave. Pieces of plywood cover the house’s windows and rear. A blue tarp blankets a portion of the roof area in the back. And a chain-link fence, standing a few feet high, secures the historical but dwindling structure.

Jeffrey Higgs, executive director of the LeMoyne-Owen College Community Development Corporation, said there has been interest expressed from various institutions to develop the structure, but the DIY Network, a Knoxville-based cable channel, seems like the best candidate thus far.

To date, there have been a couple plans to preserve the South Memphis landmark presented in Shelby County Environmental Court. One idea involved a married couple converting the house into the headquarters of their radio station, which would also serve as a lab that teaches communications majors at LeMoyne-Owen College a variety of radio broadcasting skills.

Another plan involved removing the home from its foundation and relocating it a mile southeast to the Soulsville neighborhood and transforming it into an interactive museum.
But nothing has been done with the home so far.
​
​In spite of progress moving at a snail’s pace, there may be some brighter days ahead for the meager dwelling where Aretha Franklin was birthed on March 25, 1942.

Higgs said it was about two years ago when the DIY Network initially contacted the South Memphis Renewal CDC after seeing a Facebook post about the home’s much-needed restoration. He said representatives visited Memphis last year to view the house, take measurements and inspect a site where the home could potentially be relocated.

According to earlier reports, the DIY Network would repair Aretha Franklin’s home for one of its programs.

Higgs said the South Memphis Renewal CDC is currently in the process of arranging a meeting with the DIY Network to discuss its plans in detail. He couldn’t provide any additional information on the matter.
“No decision has been made about moving it or keeping it where it is,” Higgs said. “Ultimately, we want what’s best for the house. Our goal has always been to preserve it for not only Aretha Franklin’s legacy, but her father’s (Rev. C.L. Franklin) legacy.”
​
The South Memphis Renewal CDC, a group established by the LOCCDC that’s dedicated to assisting restoration of culturally- and musically-rich properties in pockets of the city’s southern community, was appointed as receiver of Aretha Franklin’s birth home by the Environmental Court.

In June 2016, Shelby County Environmental Court Judge Larry Potter placed the deteriorating home into city receivership and ordered for its demolition. However, the demolition order was later stayed, and the South Memphis Renewal CDC was provided with additional time to submit its plan to salvage the home.

​South Memphis resident T.L. Dean has owned the apartment building at 378 Lucy Ave. for more than a decade. The two-story dwelling is located several feet from Aretha Franklin’s birth home. Both structures are stationed on the same side of a one-way street peppered with blighted properties and vacant plots of land.

Dean is hopeful that the long-awaited restoration and maintenance of Franklin’s residence could create a domino effect of positive developments in the area.

“This neighborhood needs whatever improvement we can put in it,” Dean said. “A lot of residents and property owners are in and out of here, and property maintenance is not that strong of a priority. Maybe, something like (restoring the home) would help inspire that upkeep.”

The next hearing in Environmental Court concerning the home’s fate is slated to take place Thursday, March 23rd at 10:30 a.m.

Alan Crone, special counsel to Memphis Mayor Jim Strickland, echoed Higgs’ claims that discussion is taking place with several groups about the long-term care, maintenance and security of the home, but there is no concrete plan in place.

“There’s people that want to do something with it and there’s money to restore it, but then what do we do with it?” Crone inquired. “The ideal situation would be to have some institution in the business of maintaining historical sites and/or places like this, who knows how to curate it and present it to the public.”

Whether the home is preserved at its current location or relocated to a different area, the consensus is that the cottage where Aretha Franklin rested her head in the early 1940s boasts historical significance.
​
June West, executive director of Memphis Heritage, has had an unsanctioned presence in the battle to save Aretha Franklin’s birth home. She helped assemble a team of volunteers that boarded up the home, and is a staunch advocate of restoring and preserving Memphis’ historic properties.
“Aretha Franklin is a national treasure of the United States,” West said. “To be able to claim her birth home, where she was literally born and entered into the world, adds to our music history. We should never forget it.

Kids today would think that she was born in a hospital, but, no, she was born in that house. It’s a historic piece of musical, gospel and African-American church history.”