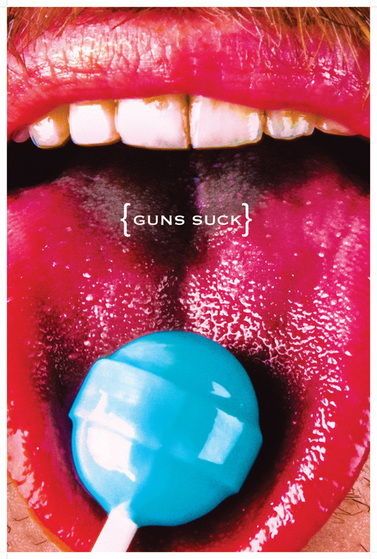 Art can have positive impacts on society, but can it reduce gun violence? That’s what a handful of Memphis College of Art (MCA) students are hoping for.

The exhibition is on display in the main gallery of MCA’s Rust Hall through January 29th.

Twelve students from the institution’s Sustainable Design Studio and Design of Advertising courses collaborated with Mayor A C Wharton’s Innovation Delivery Team for the exhibition. By September, the team hopes to have reduced youth gun violence by 10 percent citywide and by 20 percent in selected areas of Frayser and South Memphis through its Memphis Gun Down initiative.

John Wilbanks, a 21-year-old design major at MCA, created two posters for the project. One displays a close-up shot of a mouth with a sucker on the tongue and the words “Guns Suck” in small text. The other is a whimsical illustration of colorful balloons with typography of the words “The Future Is Not Bulletproof” sketched on them.

“A lot of the stories that we heard from the Mayor’s Innovation Delivery Team involved the idea of the future of Frayser and how the current rate of gun violence was threatening Frayser and the future of its children,” Wilbanks said. “I started playing with childlike imagery to see if I could create some type of visual story that would relate to the idea of how gun violence that happens right now is affecting the future.”

According to the Memphis Police Department (MPD), 1,343 people between 13 and 24 years old were arrested for gun-related crimes in Memphis in 2012. Over that same time period, more than 2,300 people were shot or reportedly shot at. Of the 157 homicides that took place in the city in 2012, more than 80 percent were committed with a firearm.

MCA students met with the mayor’s team to discuss the city’s youth gun violence dilemma and learn strategies that the team is using to help lower its gun violence crime rate. MCA students also conducted their own interviews within Frayser and were provided tours of the community by MPD’s Community Outreach Program unit.

“I really want them to challenge themselves and their role as a socially conscious designer, in order to advocate the city of Memphis as a sustainable community,” said Hannah Park, MCA assistant professor and the project’s organizer. “The designer has been known as a problem solver focusing mainly on the aesthetic concerns, but we believe that designers should be more proactive as a part of the community.”

After completing the posters, students showcased them to residents of Frayser, Cooper Young, and the Overton Park area, in hopes of creating a conversation about local gun violence and sparking ideas for how it can be reduced.

“This is an excellent opportunity to raise public awareness,” said Bishop Mays, director of Memphis Gun Down. “Not only should a message of non-violence resonate with conflicted youth, but the general public as a whole should pay more attention to our community needs to combat gun violence.”

By @Lou4President
The article is also featured in The Memphis Flyer