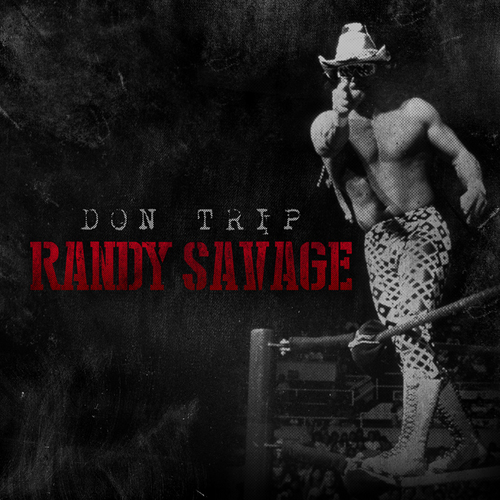 Don Trip’s Randy Savage is filled with clever wordplay, bass-ridden production, and memorable excerpts of one of pro wrestling’s most sensational stars.

The 10-track mixtape’s opening track, “Randy Savage Entrance,” finds Trip showcasing the lyrical prowess that garnered him a spot among XXL‘s Freshman Class of 2012. Following a sample ofMacho Man’s legendary entrance, Trip puts listeners up-to-date on what brought forth the delay of him releasing solo efforts over a Lex Luger-reminiscent track produced by Yung Ladd.

The forceful introduction is followed by the Juicy J-assisted “Still in the Trap,” a song that’ll be perfect for both the clubs and subs; and the high energy, upbeat “Mojo Jojo,” which pays tribute to the supervillain from Cartoon Network‘s famed animated series “The Powerpuff Girls.” I personally think the chorus could’ve been more creative, but Trip doesn’t disappoint lyrically on the track.

On “Road Warriors,” Trip connects with his comrade Starlito to passionately spew lines about their challenging upbringings. Common collaborators, the duo released their joint effort Step Brothers 2 in late 2013.

Another solid track on the mixtape is “New Blinds,” which features fellow Memphis spitter Young Dolph and highlights the paranoia one experiences from hustling. On “Cream of the Crop,” Trip vents about the trials and tribulations he experienced from signing with Interscope; the Macho Man excerpt at the beginning of the song is priceless.

The remaining tracks on the installment, “Neil Armstong,” “Proof” and “Macho Madness,” are all solid songs as well.

In my opinion and ears, Trip shines bright, primarily from a lyrical perspective, on Randy Savage. The East Memphis native’s lyrics are fairly flawless, the production is dope, and the concept is creative. Some of the choruses could’ve been a little stronger and Trip’s adlibs can get annoying at times, but other than that he produced an ill mixtape.

Aside from the music, I think it’s impressive how Trip managed to keep the project centered on Savage’s wrestling persona. Every song starts with Macho Man’s signature catch phrase, “Oooh yeah!” or an excerpt of an interview he did. For those like me who were big wrestling fans during the 90s, you can’t forget the eclectic appearance and personality of Macho Man. Noting that, I applaud Trip’s decision to help preserve Savage’s legacy.

On the morning of May 20th, 2011, Savage, real name Randy Mario Poffo, died of cardiac arrhythmia. While driving with his wife in Seminole, Florida, he experienced a sudden heart attack and became unresponsive. He subsequently lost control of his Jeep Wrangler and crashed into a tree. He was 58 years old.