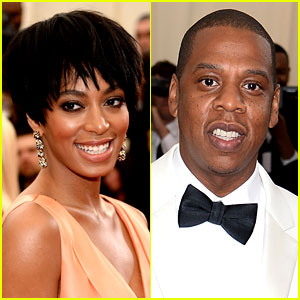 Footage that allegedly shows Jay-Z being attacked by his sister-in-law, Solange Knowles, was posted on TMZ’s website Monday, May 12th.

The footage, which was caught on a surveillance camera, shows a woman, presumed to be Solange, kicking and swinging at a man, believed to be Jay-Z, inside an elevator.

According to TMZ, the physical dispute occurred during an after party for the 2014 Met Gala, an annual fundraising ball that benefits the Metropolitan Museum of Art’s Costume Institute, at the Standard Hotel in New York City. The event happened Monday, May 5th.

Although the video is in black and white and doesn’t have audio, the woman shown kicking and swinging boasts the same hairstyle and attire that Solange sported during the Met Gala. Furthermore, the man she’s attacking is in a suit and bow tie, which Jay-Z wore during the ceremony.

As the attack takes place, there’s a woman standing next to the man’s side wearing a dress that resembles the one Beyoncé was seen in at the gala. A larger man, presumed to be a bodyguard, can also be seen in the footage.

Beyoncé and Solange left the after party in one car. And Jay-Z left in a separate vehicle.

A representative for The Standard Hotel released a statement to HLN with regard to the leaked footage:

“We are shocked and disappointed that there was a clear breach of our security system and the confidentiality that we count on providing our guests,” the statement said. “We are investigating with the utmost urgency the circumstances surrounding the situation and, as is our customary practice, will discipline and prosecute the individuals involved to our fullest capacity.”

It hasn’t been disclosed what caused the disagreement. And neither of the people involved have publicly commented on the occurrence. Check out footage of the incident below.