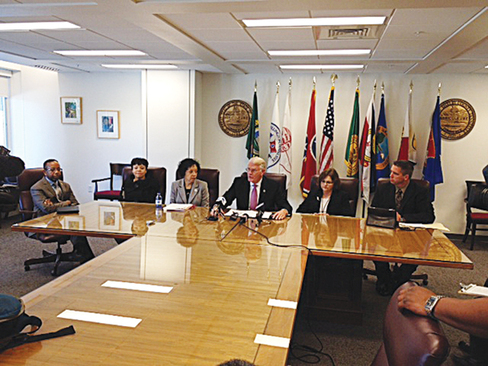 The severe, and often fatal, virus known as Ebola has claimed more than 4,500 lives in West Africa. After the disease was detected in Dallas, a sense of panic spread throughout the U.S.

But Dr. Helen Morrow, health medical officer for the Shelby County Health Department, said the likelihood of Ebola spreading to the county is miniscule.

“I think people should be concerned, aware, [but] I don’t think they need to panic,” Morrow said. “We have been reaching out to the community to try to educate them about this disease and the control of it.”

Since Ebola’s most recent outbreak in March, more than 9,000 people have been diagnosed with the virus. However, the World Health Organization estimates the number of people infected is possibly 2.5 times higher than the number reported.

The virus has become an epidemic in the West African countries of Guinea, Sierra Leone, and Liberia. But on September 30th, Thomas Eric Duncan became the first Ebola patient diagnosed in the U.S.

Since then, the amount of Ebola cases in the U.S. has risen to eight. The increase in cases have caused many to fear the virus will spread and become an epidemic in the U.S. False alarms have been reported, some flights have been cancelled, and international airports are now screening people flying into the U.S. from the West African countries impacted by Ebola.

“The risk to the general public is very, very low,” said Health Department spokeswoman Elizabeth Hart. “You’re nearly 100 times more likely to get the flu than you are Ebola.”

The health department has held conference calls with the Centers for Disease Control and Prevention regarding guidelines for personal protective equipment and infection control. And helpful information on Ebola is being provided by the Health Department via social media and its newly-formed Ebola Speakers Bureau.

On October 21st, Shelby County Mayor Mark Luttrell held a media briefing to discuss response methods that would be utilized if Ebola spread to Memphis.

“We know that we can control Ebola through identification and isolation of patients who have the disease. And [we would] identify and monitor contacts within 21 days,” said Yvonne Madlock, executive director of the Shelby County Health Department. “We can prevent the spread of Ebola through infection control, provision [and use] of the appropriate personal protective equipment, and by safely handling bodies of those who might have died from Ebola disease.”

Ebola is spread through direct contact with blood or bodily fluids, such as urine, saliva, semen, or vomit, from an infected person. Initial virus symptoms include fevers, headaches, muscle aches, vomiting, and diarrhea.

The average person begins to experience symptoms within two to 21 days after they’ve been exposed to the virus. If a person experiences any of the aforementioned symptoms, they’re encouraged to notify a local hospital and the Health Department.

The current Ebola outbreak in West Africa is the largest thus far. The virus was discovered in 1976. It was reportedly passed from fruit bats to primates and other wild animals. And humans seemingly transmitted the virus from hunting and eating Ebola-infected animals.

Dr. Michael Whitt, chair of the University of Tennessee Health Science Center’s Department of Microbiology, Immunology, and Biochemistry, recently co-edited the book, Biology and Pathogenesis of Rhabdo- and Filoviruses, which includes information on Ebola, how it evades the immune system, and vaccines in development to treat it. Currently, there is no vaccine for Ebola.

“This is not something that, in the U.S., is going to spread across the country like, for instance, the West Nile virus,” Whitt said. “Ebola, you can only catch from another person who has symptoms. If there are indications, it can be contained, and it’s not going to spread. We don’t have a pandemic on our hands.”