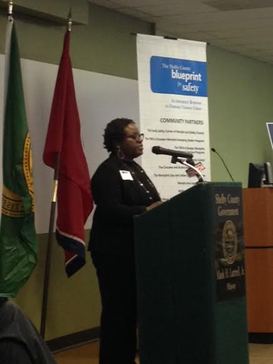 Olliette Murry-Drobot talks during Blueprint for Safety press conference in Memphis.
Kamekio Lewis still remembers the night her former boyfriend chased after her with a knife as she ran barefoot through a neighborhood. When she slipped and fell, she was captured, dragged through the nearby woods by her hair, and brutally beaten.

“He took me to an abandoned house,” Lewis recalled. “My mom ended up finding me some kind of way the next day. Charges were filed: kidnapping [and] assault. I ended up having to be hospitalized. I had a concussion.”

Lewis’ abusive relationship lasted more than two years before she escaped by entering the army. She hasn’t looked back since.

A new comprehensive response to domestic violence, called the Blueprint for Safety, has been launched to aid people in situations like Lewis’. The initiative is intended to assist victims from the time they experience domestic violence and contact a 911 operator through law enforcement’s response and the offender’s prosecution.

Lewis’ story of domestic abuse is all too common. There were 247,069 reports of domestic violence offenses made to the Tennessee Incident Based Reporting System (TIBRS) program from 2011 to 2013. More than 70 percent of victims were women. Across the nation, one in four women is projected to report domestic abuse at some point in their lives. Domestic violence typically involves physical, emotional, verbal, economic, and/or sexual abuse by one person against their spouse or partner.

The Blueprint for Safety is being funded by a $300,000 federal grant administered through the U.S. Department of Justice’s (DOJ) Office on Violence Against Women (OVW).

“The Blueprint for Safety is an approach to domestic violence cases that coordinates agency responses around the shared goals of safety and justice,” said Bea Hanson, principal deputy director of OVM. “It closes the gaps between what victims of violent crime need from the criminal justice system and the way in which the system is currently responding. The whole point of the Blueprint is to make sure that we’re keeping victims safe and holding offenders accountable.”

Memphis is the fourth city to adopt the DOJ’s Blueprint for Safety model. The initiative is already being implemented in St. Paul and Duluth, Minnesota, as well as New Orleans, Louisiana.

Although it was revealed during the news conference that around 8,000 domestic violence cases occur in the Memphis area annually, the offense appears to be on the decline. According to Operation: Safe Community data, reported cases of domestic violence have decreased more than 16 percent locally since 2011.

The Family Safety Center has been connecting victims of domestic violence with civil, criminal, health, and social services since 2012.