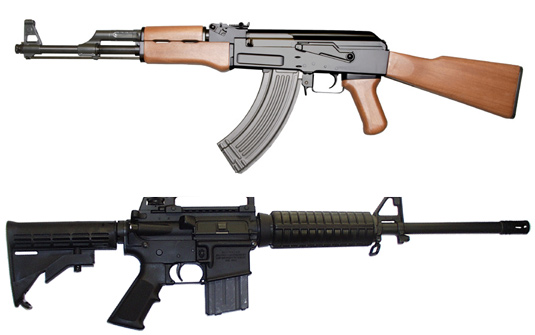 ​The evolution of two of the world’s most popular assault rifles, the AK-47 and AR-15, is explored in the The New York Times‘ article “Tools of Modern Terror.”

The article examines how assault rifles transitioned from being weapons solely used for war to weapons used in terrorist attacks and public mass shootings.

Provided in eight mini-parts which are paired with photos and gripping illustrations, the article begins with a brief timeline of egregious acts committed by individuals possessing variants of the AK -47 and AR-15. This is followed by background on the AK-47’s creation.

​According to the article, a contest among gunsmiths and engineers in the Soviet Union to design “a rifle that would combine the rapid-fire ferocity of machine guns with the portability of lighter-weight arms” spawned the world’s most abundant rifle’s creation. The late Mikhail T. Kalashnikov is credited with developing the AK-47, which is referred to as a ‘Kalashnikov’ in the article.

Subsequent to the brief history lesson on the AK-47’s post World War II birth, the story touches on the weapon’s mass production and some of the qualities that helped contribute to its popularity. These attributes included the weapon’s durability and reliability; easy disassembly and reassembly; and the size of its cartridges, smaller and lighter than traditional rifle magazines.

​The AK’s ability to fire ammo rapidly with little-to-no complications, making it a perfect weapon for war, inspired the U.S.’s creation of the the AR-15, also known as the M-16. The American-made assault rifle boasted similar capabilities of its foreign predecessor.

But the information on the history of the AK-47 and AR-15 isn’t necessarily why I chose to share the article. It’s more so because it examines the adverse impact assault rifles have had globally since finding themselves in the hands of the wrong individuals.

The “Munich Massacre” is among the examples used to convey the potential danger of assault rifle misuse. The horrid occurrence involved members of a Palestinian terrorist organization using AK-47s to execute 11 people during the 1972 Summer Olympics in Munich, West Germany.

​The Munich Massacre is reportedly the first highly publicized terrorist attack that involved assault rifles. Subsequent to the massacre, assault rifles became go-to weapons for not only those engaged in war, but terrorists and mass shooters alike.

I think the article is worth checking out if you’re interested in reading about the evolution of assault rifles over the decades, and  the scores of lives that have been affected by their misuse.

​​​Check out the article here.