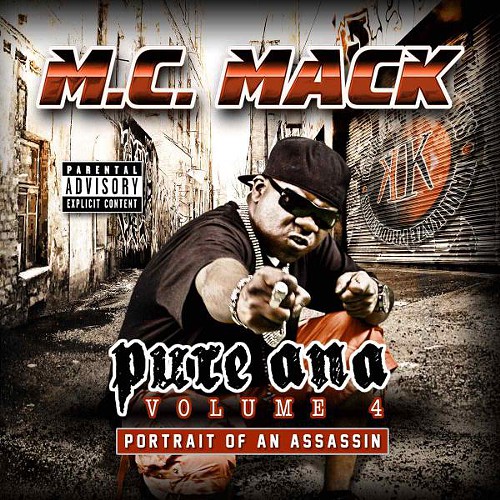 Memphis rap legend M.C. Mack knows the true meaning of consistency. He hasn’t looked back since penning his first rhyme in the sixth grade. By age 37, he’s sold more than 150,000 records independently and is considered a legend by many in the South.

He’s currently prepping for the October release of his latest album, Pure Ana Volume 4: Portrait of an Assassin. The album, which is the fourth installment of his Pure Ana series, will be available exclusively on iTunes, Selectohits.com, and IAPStore.com.

“With this record, listeners can expect that Memphis flow. I’m gonna keep it Memphis,” M.C. Mack said. “I have a track called “The Black Emmanuelle” that’s real laidback. I’ve got life songs like “Bring My Homie Back,” which is for all my dead homies.

“There’s “Do You Remember,” which talks about the old club days, the old skating rink, the old Libertyland and all that. I’ve got the “Drug Song Pt. 3” featuring Scan Man. I try to give fans a wide variety of songs to select. If you’re a M.C. Mack fan, you’re definitely going to dig part four. It’s most definitely my tightest work yet.”

M.C. Mack obtained his initial exposure through his affiliation with Three 6 Mafia. He was once signed to DJ Paul and Juicy J’s Prophet Entertainment (the two would later go on to found the extremely successful label, Hypnotize Minds).

His smooth but tongue-twisting lyrics can be heard on several of the labels gold- and platinum-selling albums, such as Three 6 Mafia’s Chapter 2: World Domination and When the Smoke Clears: Sixty 6, Sixty 1.

He was also a founding member of the group, the Killa Klan Kaze, along with labelmates Scan Man and K-Rock, who would later be replaced by Project Pat (fresh from incarceration at that time). The group shortened its name to The Kaze and released its first and only album, Kamakazie: Timez Up. It’s sold around 50,000 units independently since its 1998 release.

“I’ve achieved a lot as far as the Memphis music game goes,” M.C. Mack said. “There haven’t been too many Memphis rappers who have been heard on platinum records and gold records. I’m one of few. Thanks to Paul and J. They gave us an opportunity to get heard and exposed.”

Noticing the success that could be obtained from taking the independent route with music, M.C. Mack, along with partner Scan Man, decided to form Kami Kaze Productions. Still signed to Prophet Entertainment as artists, the two, also producers, provided local artists with production.

However, this caused some confusion with DJ Paul and Juicy J, who both wanted a cut from the duo’s profits. The issue also brought forth a delay in M.C. Mack’s solo album release. He would later depart from the label and, with the assistance of Scan Man, transform Kami Kaze from a production company into an actual music corporation.

“Once we started doing our own thing and making a little noise, I felt that they felt threatened or something because they stopped answering calls and stopped coming around when it was time to get down to business,” M.C. Mack said. “When we started making music and distributing it, the business part kind of fucked up the relationship. They didn’t want to fulfill their end of the contractual obligations with my solo album.

“It was like, damn, I’m stuck between not being able to record or put out my own music because they wanted a cut out of it. The distributor didn’t want to put it out because he didn’t want to take the risk of getting a lawsuit for putting out music that wasn’t authorized. It basically held up my whole career [at the time]. That’s kind of when the falling out began. Really, it was just a misunderstanding because now record labels are allowing artists to do their own thing,” M.C. Mack said.

After leaving what could be considered the most successful rap record label in the city, M.C. Mack put his all into transforming Kami Kaze Inc. into its own successful enterprise. Acquiring a handful of artists and releasing nearly 20 albums on the label to date, it’s safe to conclude that the label has been prosperous.

Now a couple of decades into the game, M.C. Mack said his passion to create music is as strong as it’s ever been. He said the idea of leaving the rap game is a thought far from his mind.

“Music is my life,” M.C. Mack said. “When I go in the booth to record, I still get the same chill bumps from back in the day. The passion is still there. It’s probably even stronger now. Back in the day, we were doing it just for the sake of recording. Now that we’re able to make money off of it, there’s even more passion in it. It’s an art of expression just like dancing and poetry readings. It’s also something that keeps me out of trouble and a way to do something positive.”

#DoughboyWee talks about being incarcerated during the success of #DoughboyzCashout and losing close friend/fellow member @doughboy_roc in part two of our convo. Peep it on the #AHS YouTube channel. #AHumbleSoul #Subscribe
“Anybody can get signed if #Blueface got signed...” Peep part 2 of our interview with #floodmoney on YouTube 👀#AHumbleSoul #Subscribe